Uber Driver Says He Was Fired After Being in Protest Photo 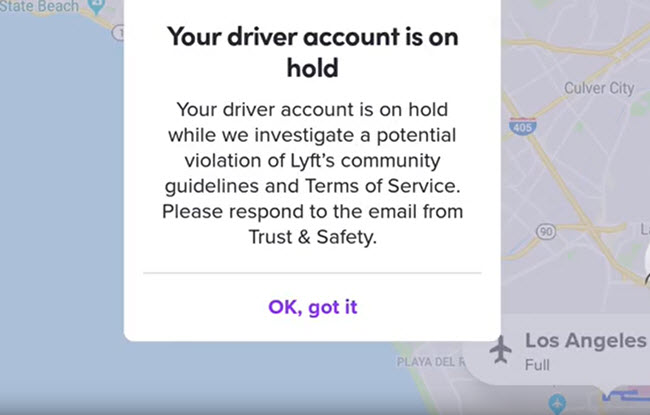 Unfair driver deactivation from the Uber or Lyft application is a common complaint by activists protesting negative actions by the big rideshare companies.

Active drivers (and people thinking about giving rideshare driving a try) should understand they could be deactivated (essentially fired)… although assuming a driver is delivering professional service and following the directives in their legal contract with Uber and Lyft it’s unlikely an unfair driver deactivation will happen to them.

In the article referenced for this blog a driver is suing Uber claiming he was permanently deactivated because he participated in a peaceful protest against the company.

“In a lawsuit filed Wednesday in Illinois federal court, Youssef says he faced retaliation after participating in an October 2018 protest urging Uber and rival ride-share company Lyft Inc. to limit the number of their drivers on the road. Youssef was captured in a Chicago Tribune photograph holding a sign that said, Lyft/Uber Respect Chicago Drivers.”

On its surface this sounds really bad?

Especially true given the sign the driver in question was photographed holding was only asking for “respect” so not making any claims or saying anything that was directly negative about Uber or Lyft.

As Americans we have the right to protest peacefully without fear of retribution, right?

The legal contract all drivers agree to in order to complete Uber passenger trips does prohibit drivers from making negative statements about Uber in a public forum… but deactivating a driver for appearing in newspaper photograph holding a sign that simply asks for “respect” would just be wrong?

“Youssef was terminated from Uber solely based on his participation in the peaceful protest pursuant to his First Amendment right as a private citizen,”

I commend the author of this news article for reporting both sides of this story by including what could be important details from the lawsuit:

“Youssef said in his lawsuit that Uber said it was deactivating him for, among other transgressions, creating duplicate accounts, accepting trips without intending to complete them and claiming false fees or charges.”

I freely admit I have no way of knowing without question that Uber’s stated reasons for deactivating the driver are true… but two of the three reasons match up with fraudulent practices I know some drivers use to increase their incomes.

Accepting Trips Without Picking Up Passengers

“Accepting trips without intending to complete them…”

When a passenger requests a trip and the driver accepts, the passenger has 2 minutes to cancel the trip request without being charged a Cancellation Fee.

Countless times my passengers have told me they’ve had drivers accept a trip request then the passenger watching the passenger application sees that the driver’s vehicle is not heading toward the pickup location… then my passengers ask me why a driver would do this?

I explain that the driver likely never intended to pick you up, instead they are hoping you cancel the trip after the 2 minute “grace period” then the driver gets paid a Cancellation Fee.

In Denver, Colorado (fees could be different in other markets) I would get $3.75 because the passenger cancelled the trip request greater than 2 minutes after I accepted the trip and started driving toward the pickup location.  The passenger is charged $5 so Uber keeps $1.25 for facilitating the transaction.

Again, I have no way of knowing if this driver was using this fraudulent practice to increase his income. 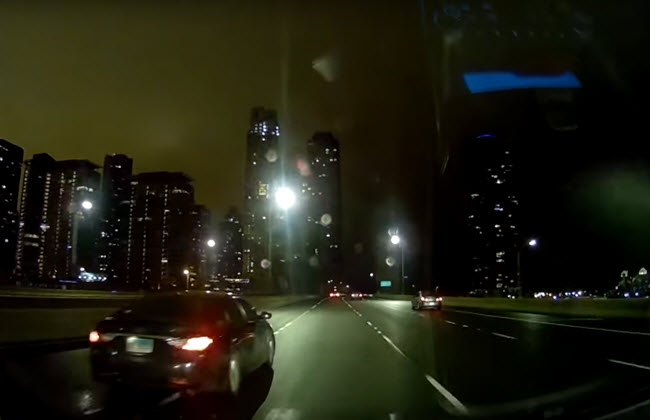 If the driver had read my book How to Be a Lyft and Uber Driver – The Unofficial Driver’s Manual, I hope he would realize fraudulent practices are not worth the risk because all financial transactions are recorded in a driver’s electronic history and given fraud is prohibited in the Lyft and Uber driver contracts, the risk of driver deactivation is not worth the risk of not being caught.

If you think about it $3.75 is not a lot of money… in order for this one to make any sense a driver would have to do it more than a little… there could be software code looking for signs of this behavior but even if there isn’t a couple of negative written reviews from passengers could cause Uber/Lyft support resources to review a driver’s history and it wouldn’t be hard to tell that a driver was

“Accepting trips without intending to complete them…”

One of the benefits of being a rideshare driver is not having a boss looking over your shoulder… but given that everything related to the financial transactions is recorded and saved forever drivers are not making sound business decisions by “stealing from the cash register.”

You may have seen drivers complaining online and in news articles that: “My boss is a software algorithm.”  I believe tracking negative and potential financial fraud is behind some of these complaints, but that’s a story for another blog.

Now let’s dig into the second reason for the Uber driver deactivation:

Again, I have no way of knowing if this driver’s complaint and lawsuit claiming participation in a peaceful protest is the real reason behind his Uber driver deactivation but “…false fees or charges” sounds like something that has been covered by news articles for years: “Vomit Fraud.”

Vomit fraud makes for a great headline… but a false fee could also mean claiming passengers made any kind of mess in a driver’s vehicle. 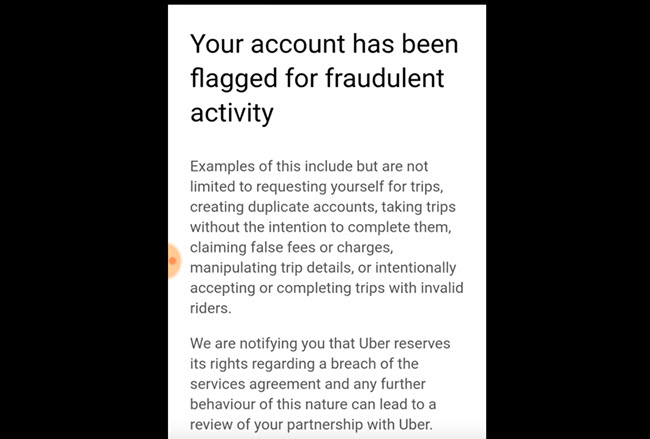 Once I had a couple of passengers open a large bag of chips in my backseat soon after I started driving, they were obviously sharing from the bag during their 20+ minute trip.

If they’d asked if they could eat in my car the sound of them crunching chips probably would not have annoyed me as much as it did.

After I dropped them off at their destination I drove around the corner then pulled over to take a look at my back seat… it was nighttime so it wasn’t until I opened the backdoor that I saw chip fragments all over the seat and floorboard.

Again, if they’d asked if it was okay to eat in my car I might have been more forgiving, but instead I took a couple of photos of the mess and opened a support ticket.

I was very surprised at the amount, I would have been happy with a $10 charge but thought: “Whatever… a $40 charge should teach these passengers a lesson and their future drivers will benefit.

I drove a few more hours that night and of course thought about the $40 as “easy money.”

I never thought about faking passenger messes… thankfully my Mom taught me that being untruthful was a behavior that had zero chance of ending well in the long run.

Also true as a data analyst I know it would be very easy to identify drivers who report significantly more passenger messes compared to the average for all drivers.  I’m not going to risk my rideshare driving “gig” for some easy money, it’s just doesn’t make business sense.

As far as the third reason given for this Uber driver deactivation:

I’m not sure what reason an active driver would have for creating more than one Uber driver account.

Unanswered questions tend to bug me so I’m probably be thinking about how a driver might profit from having more than one Uber account.

I want to dig into one more quote from the referenced article… this quote suggests why this driver might have violated his legal contract with Uber and created a fraudulent account:

I had to read this quote a couple of times to understand what it was saying… the driver was deactivated as a UberX driver then six months later signed up as an Uber Black driver and presumably drove for some time then was deactivated again.

It’s likely the first deactivation, as an UberX driver, would have prevented the driver from signing up to drive for a different class of driver using the same information that was used in the first account. 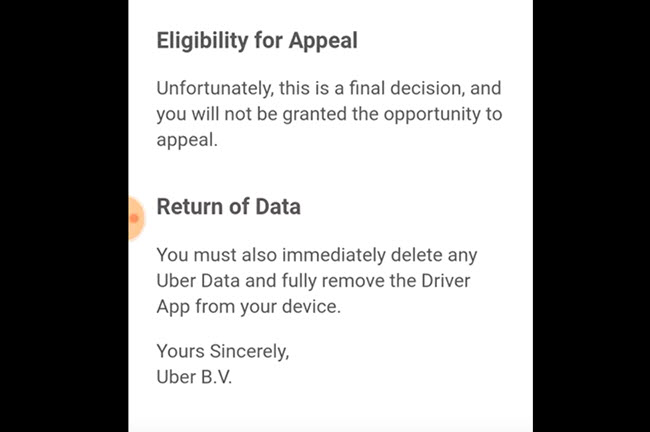 In order to sign up after an Uber driver deactivation, a driver would probably have to use a different phone number; home address; and maybe even a different name or other required information… using the same information probably would have caused the software signup to return an error like: “Phone number connected to a deactivated account.”

Pardon me for repeating myself but it’s important I say I have no idea what happened in this case… I’m analyzing what’s written in the referenced article and sharing my thoughts.

If the driver knowingly created a second Uber driver account using different information that sounds like fraud to me?

But what really stood out in the last quote was:

We’re talking about an experienced driver so maybe he knows what kind of income he can earn driving in Chicago and believed that paying $75,000 for a vehicle in order to be a rideshare driver made business sense?

In my book Driving for Uber and Lyft - How Much Can Drivers Earn? I work through all of the math required to make sound rideshare driving business decisions and I don’t recommend spending this kind of money on a rideshare driving vehicle.

Probably safe to assume $75,000 means a brand-new vehicle.  New vehicles lose 5-10% of the vehicle’s resale value just driving in home from the dealer… from a business perspective that represents a $3,750 to $7,500 business loss before earning anything from the business asset.

A vehicle used for full-time hours rideshare is going to have significantly higher mileage and will likely lose at least 50% of it’s resale value meaning an accounting business loss of $37,500.

As I said we are talking about an experienced driver in the Chicago market, maybe he believed he would earn significantly more than the average $20-$25 per hour.

It’s unlikely we will see a news article if this driver loses his lawsuit… and again with no way of knowing the details behind the case I’m betting Uber will win.

It would make zero sense for Uber to permanently deactivate this driver for participating in a peaceful protest… if they did and investigative reporting found them out you can bet it would be a front-page news story.

In closing if you’re thinking about being an Uber and/or Lyft driver take a look at two years of my actual rideshare driving earnings by contacting me and requesting a free copy of my Rideshare Earnings Case Study.

Uber Driver Says He Was Fired After Being in Protest Photo