Lyft and Uber Driver Rights – What Are They? 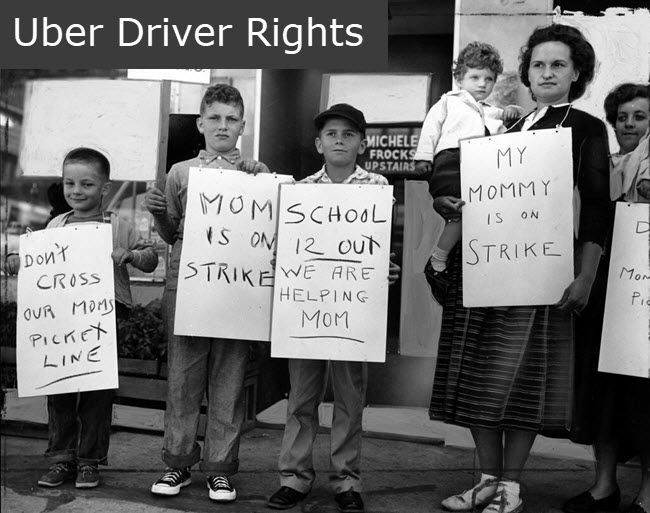 As promised, I’ve been following the action behind the bill currently being debated in state legislature as

When I saw the following in the referenced article, I thought:

“There’s your answer right there!!!”

“Over all, millions of workers in the state could be affected by the legislation, including construction workers, janitors, house cleaners, cable installers, truckers and delivery drivers.”

I promise to get to why I think this quote is a gigantic clue where AB5 is going… stick with me.

For years I’ve been saying the consternation (feelings of anxiety or dismay) that seems to be focused primarily on Uber driver rights is a much bigger conversation.

If Uber and Lyft are giving drivers “the short end of the stick” by misclassifying them as independent contractors, then millions of workers in other industries are being mistreated too?

On a related note when I see the term “living wage” connect to stories in the news about primarily Uber drivers I get a little worked up… in part because it’s not like Uber, Lyft and other rideshare drivers are the only ones who may be struggling to make ends meet?

I’ll spend more time on “living wage” in a future blog… for now I’m forcing myself to focus on California AB 5.

Independent Contractors - Who Are They?

From recent news articles and Wikipedia's definition of an independent contractor, we find these workers and work activities which may be affected by California AB5:

Granted that is probably an obnoxious and unnecessarily long list… but I’m making my point!

The reason I believe California AB5 is “dead in the water” is it’s not possible to target Uber, Lyft, and the rideshare driving industry without having the much bigger conversation.

Check out some of the categories in the Wikipedia list… how can California grant employee rights to Lyft and Uber drivers without also granting them to "swimming pool service technician" and "telephone and live chat psychic"?

Note that almost everyone working in the entertainment industry is also an independent contractor.  From your favorite movie actor or actress to the production assistants and everyone in-between!

Check out this article:

California AB5 is not just about Lyft and Uber driver rights… if it was then I expect it would have a decent chance of becoming law someday.

Uber and Lyft are campaigning against AB5, specifically against reclassifying California rideshare drivers as employees… but Uber and Lyft are far from alone and I believe the pressure from the wide range of interests negatively impacted by AB5 means the legislation is doomed.

But hey, I could be wrong… and what if I am?

What if California passes any kind of law that forces Uber, Lyft, and other rideshare companies to reclassify rideshare drivers as employees?

Uber and Lyft - Could They Cease Operations in California over Driver Rights?

I believe Uber and Lyft will suspend rideshare services in California.  I know this would be huge but not as big as the implication of other states making similar moves.

Think I’m wrong on this one?

Uber and Lyft pulled out of Austin, Texas for a year because they didn’t want to risk having to pay for fingerprinting every rideshare driver.  They knew if they said yes to Austin other cities and states might follow suit which would have been a significant expense. (The state of Texas overruled the City of Austin after a year, and Uber and Lyft returned to the city.)

Personally, I would be willing to pay an annual fee to cover additional security checks for rideshare drivers, but I suspect I’m in the minority on that point, and this blog post is not about improving passenger and drivers safety, again a topic for another day.

From the referenced article:

“At stake are billions of dollars in potential costs for the two companies. Industry officials have estimated that relying on employees is about 20 to 30 percent more expensive for gig-economy companies than relying on contractors. In its filing for an initial public offering earlier this year, Uber told investors that having to classify drivers as employees would ‘require us to fundamentally change our business model, and consequently have an adverse effect on our business and financial condition.’ Lyft’s filing included a similar warning.”

Think Uber and Lyft are just talking about employee expenses like paid time off and employment taxes?  No, they are referring to all of the costs related to providing what rideshare gig workers are deeming as “driver rights”.

Consider this: employees have supervisors to create work schedules and perform other activities required to manage employees.  More human resource workers would be required to hire/fire and provide other employee support?

I’m only scratching the surface of what Uber and Lyft mean when they say:

“…require us to fundamentally change our business model…”

I will continue to watch for updates on California AB5 but for now I’m thinking it’s all but over already.

The rideshare driving gig is very well defined when a driver signs up to drive. Here’s Uber clearly describing the rideshare gig and comparing it to other driving jobs. Why do people think they can sign up for this gig and then start whining about why it needs to change? Perhaps the people insisting on Lyft and Uber driver rights would be happier working at McDonald's or Walmart.

Lyft and Uber Driver Rights – What Are They?