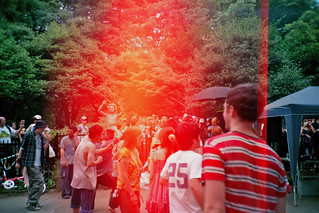 This “news” headline may seem like bad news for rave party-goers and good news for Uber drivers?

“For ravers, being able to use a rideshare service is a dream come true. For the drivers, not so much—and not just because they don’t like listening to EDM or dealing with hyped-up party-goers.”

Personally, my only direct experience with rave parties is seeing the parties portrayed in movies.

Just in case the movies portrayals were over-dramatized I checked in with Wikipedia:

“A rave (from the verb: to rave) is an organized dance party at a nightclub, outdoor festival, warehouse, or other private property typically featuring performances by DJs, playing a seamless flow of electronic dance music.” https://en.wikipedia.org/wiki/Rave

Ok, movies got that part right… reading on I confirmed my understanding a “Rave Party” is typically associated with drug use.

“…the association of illegal drugs such as MDMA (often referred to as a "club drug" or "party drug") along with MDA, LSD, GHB, ketamine, methamphetamine, cocaine, and cannabis.”

So, there you go…

I’ve been an Uber driver and Lyft driver for over three years and have completed 13,000+ passenger trips.  I live in Colorado where cannabis is legal and many of my passengers get in my car with the smell of recently smoked weed still clinging to their clothes.

Personally, if I had to choose between passengers that are high on marijuana or passengers who were extremely intoxicated… I’d always choose the “stoners” over the “drunks”… but that’s another conversation entirely.

Let’s dig into this “change” as it relates to the Uber driver side of the equation.

As reported in the referenced article:

“A new change to the app will let drivers see the first part of the rider’s destination prior to picking them up. This, in turn, might make it much harder to get to and from an event.”

As a driver I’m thinking I’m pretty sure I know what the article is talking about… but to be honest I was also hoping there was a new feature I hadn’t seen yet.

I would still transport passengers to and from rave parties, it would just be nice to have a clue a head of time passengers might be high on something other than pot.

“This change comes after Uber lost their latest court appeal against drivers’ rights back in December of last year.”

Well, this is the point where I knew this “news” article was just another silly media spin on reality.  I’m entertained by “silly media spins” so I read on.

The “change” being (loosely) reported on is the Uber Pro Program which has multiple levels: Partner, Gold, Platinum, and Diamond.

The Uber Pro Program is not available in every city/market where Uber operates, and as the multiple Program levels suggests there are requirements to qualify.

To qualify for Uber Pro a driver must have at least 3,000 lifetime trips transporting passengers.

Qualifying for and keeping a certain level requires the driver to earn a defined number of Program Points every three months (the point system is too complicated to describe for this blog post.)

The 3,000 passenger trips requirement means about two-thirds of active drivers do not qualify to participate in the Uber Pro Program… at least not yet.  This is true because of the high drop-out rate for drivers… only about 10% of new drivers are still completing passenger trips a year later.

A driver working full-time hours would complete 3,000 passenger trips in about 10 months.  Uber and Lyft publicly report that about 70% of drivers only work 10-15 hours per week… so would only reach the 3,000 lifetime trip mark after a couple of years of driving.

Since most drivers don’t continue long enough to complete 3,000 passenger trips most drivers are not Uber Pro drivers.

You might be thinking it’s not fair that only a small subset of drivers will know their passengers are going to or coming from a rave party?

Have no worries because it’s not true… I’m an Uber Pro Diamond driver and I guarantee readers the Uber driver application is not delivering the kind of information suggested in the referenced article.

Specific to rave parties, it’s not even logical to believe.

The very nature of a rave party means it’s “underground.”  Uber doesn’t know where rave parties are being held and even if they did, it’s not logical that Uber would warn drivers to stay away.

All levels of the Uber Pro Program except “partner” only see general messages about where passengers are going… for example “22 minutes northwest” which let’s me know the approximate duration and direction of the trip.

I see this information in the trip request before I accept so I can choose to let the request go by if the duration/direction doesn’t appeal to me.

Back to the referenced article:

“For years, Uber has always informed drivers of large-scale events in their area as they represent possible lucrative opportunities. They also represent places to avoid.”

This quote suggests Uber is telling drivers “places to avoid.”  As a driver I might choose to avoid being close to the end of a big event because the venue has not yet figured out how to facilitate smooth passenger pickups.

The intent of Uber’s event notification is to encourage drivers to work the end of the event and would never in anyone’s version of reality tell drivers to avoid an event?  Right?!!!

And again, the article’s headline sucked us in because it mentioned rave parties which by their nature are not publicly announced?

The body of the article walked around a number of truths and concluded by stating that the “change” would have a specific effect on getting to and from raves.

“Now, with the ability to see a rider’s destination beforehand, it’s likely many drivers will opt out of rides to the rave. The best thing to do as someone who needs a ride to the party is to be extra polite and grateful to the driver.”

Are Uber Pro drivers really rave party poopers, or is that a myth?

And at that point, if the driver knows that the address or name of the venue is a rave party, then the driver probably participates in the rave scene and the associated underground messaging announcing such events.

If that is the case, the driver might be disappointed that they can’t attend the rave party with you instead of dropping you off at the curb in front...

As far as “extra polite and grateful” I whole-heartedly agree… be nice to your drivers no matter where they are taking you and tips are always appreciated.